No amount of donation is too small to help these Japanese victims of the recent 8.9 magnitude earthquake and tsunami that swiped out Sendai on 11th March 2011. It may not occur to you on why we should help other people from another country, but don’t forget the sushi, toyota, sony, manga, anime, hello kitty, vending machines, Naturo, nintendo, kogepan, domokun, lolita, baumkuchen, crepes, Ayumi Hamasaki, Utada Hikaru, GTO, Hana Yori Dango, Hachiko and all the wonder wonderful things that came out from that country. They may be prepared for an earthquake, but not nuclear meltdown and explosion. But no matter prepared you are, if Mother Nature is very angry, you can’t avoid it. After all, we’re all citizens of the Earth.

So if you may, please do head to Groupon Malaysia‘s Red Crescent / Red Cross relief fund, and donate as little as RM3, or as much as you wish. They will match a dollar to dollar donation (up to RM25,000) for however much you donate. All donates will be REMATCHED again, so if you donate RM3, they will get RM9. Not too difficult isn’t it?

Remember Masterchef Au? Well I’m sure many of you still do if you happen to watch the reality tv cooking show for amateur cooks.. Once a week they’d have something called Masterclass; a short break in between competitions and kicking people out; chefs come in and have a special class (be it cooking, baking, making bread, cooking seafood etc etc). Well, it’s sorta like a refreshment thingy and good for us tv viewers too! So there was this class where Donna Hay came in and talked about food styling.

Styling a salad is not as easy as it may seem. Well maybe better than a plate of brown, fried stuff.But a bunch of greens isn’t that easy either. So what better than looking at a different point of view, either deconstructive, or….. something else. hehe

So, it’s just like any other regular caesar salad but it just looks differently. I have a thing with Caesar Salad that I’m quite particular of. It needs (NEEDS!) to have anchovies otherwise it is not a Caesar Salad for me.  The original version may not need anchovies, but I just need them lol. Oh, and egg of course! Poached will be better for me, but since this version calls for boiled, I’ll boil it.

Eewwy gooey slimey stuff, but oh so yummy! (Ok I don’t eat the anchovies just like that, I add them in the sauce so I could pretend, I’m not eating a piece of slimey fish just like that. Haha

So for Donna Hay’s version of Caesar salad, it calls for eggs (duh), baby cos lettuce, thin sliced baguette, maple syrup, bacon, parmesan and a self-made dressing. I changed a little as based on the ingredients I had at home. Trust me, it’s NOT difficult at all to just make a salad at home (and how cheap it is) I have no idea why restaurants charges a salad like the price of a burger and gives u a bunch of overnight chopped veges and bottle dressing. Boo. 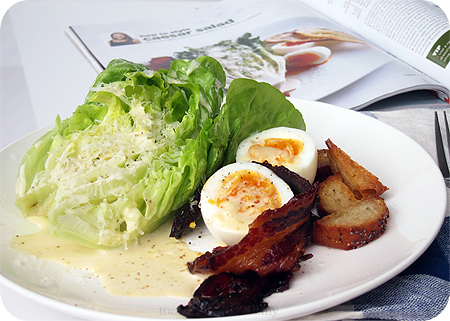 1. Preheat oven to 180 C. Rub maple syrup on both sides of the bacon. Transfer to an oven tray lined with baking paper and bake for 15 minutes or until crisps. You can see mine is close to burnt.

2. To make croutons, brush oil on baguette or other type of breads you are using and bake in the oven for 10 minutes or until crisps.

3. Bring a pot of water to boil. Now this is abit tricky. Donna boils the eggs to a soft centered yolk for 6 minutes, I boiled mine to 5 minutes but ended up with a 95% boiled yolk. So, this is totally up to your stove fire, size of pot, size of egg, and your timing. but anyways, To make the yolk in the center of the egg (so when you cut in half, you get a nice identical cut of yolk on both.) Bring water to boil, drop in egg and stir with a wooden spoon for 1 minute. Cook further for 5 minutes (more of less). turn off heat and drop eggs in iced water to stop it from cooking. Peel when ready to serve.

4. To make the dressing, process eggs, anchovies, Worchesterchire and lemon juice in a food processor until combined and yellowy. With motor running, gradually stream in oil and process till thick and emulsified. Add 3-4 tsp of water to thin if needed.

5. To assemble, cut lettuce lengthwise. Lay bacon, uncut at the side. Halve eggs widthwise, and scatter croutons evenly. Drizzle dressing on top of the lettuce. Season with sea salt and freshly cracked black pepper. Scatter with grated parmesan and serve.

It’d be peerrrfect if the yolk was runnier. yum yum YUM!!

8 Comments on Caesar Salad, with a twist

Bad Behavior has blocked 2980 access attempts in the last 7 days.