Asian Food Fest: Indochina hosted by Kelly has ended with lots of entries. Hop on over here to see more of the entries. Now let’s move to another part of Asia, the Philippines! I’m glad to host even though I’m not familiar with Philippines cuisine at all. Before I went to Boracay in April this year, I only have very little knowledge about the Filipino Cuisine. Well, it still is a something new for me and I’m hoping to learn more with all the entries submitted this month.

Asian Food Fest is a virtual event where we cook dishes for each designated country/region of the month right in the comfort of our own kitchen and share it on Facebook. Everybody is welcomed!

The Philippine cuisine had its influence from Malay, Spanish, Chinese and American culture. Spain’s culture is one of the most influential on food in the Philippines. Spanish colonizers and friars in the 16th century brought with them produce from the Americas like chili peppers, tomatoes, corn, potatoes and the method of sauteing with garlic and onions. Spanish dishes were eventually incorporated into the Philippine cuisine with the more complex dishes such as arroz a la valenciana (similar to a paella). Spanish chorizo also influenced to having Philippine longganisa (sausage).

Having said that, the type and flavour of food eaten varies from area to area in the Philippines. The staple food in some areas are rice whereas it may be cassava in some. Rice is most commonly available in every meal in the Philippines. The Bicol people of the southernmost portion of Luzon and western Mindanao Muslims are the only groups that extensively use hot peppers in their cooking.

Filipin0 cuisine is distinguished by its bold combination of sweet, sour and salty flavours, mostly by pairing something sweet and salty which results in surprisingly combinations, for example champorado (a sweet cocoa rice porridge) being paired with tuyo (salted, sundried fish), dinuguan (a savoury stew made of pig’s blood and innards) paired with puto (sweet, steamed rice cakes and pairing unripe fruits like mango with salt or bagoong. 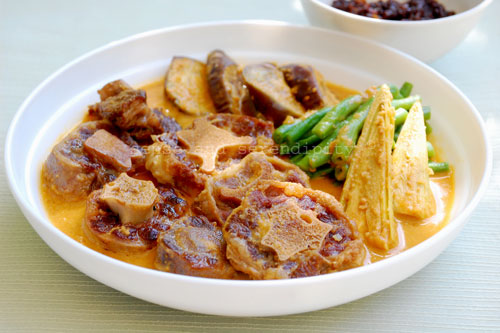 The most popular meat in the Philippines is pork, with beef and poultry following behind.  In the areas where Islam has a strong following, beef and are consumed instead of pork, with is a taboo meat. As a delicacy, the Tagalogs and the Pampanquenos eat frogs, although most Filipinos don’t consume them.

Now on to some of the more common dishes in the Philippine cuisine. (click on photos for link to recipe)

With rice being their staple food (as with most parts of Asia), don’t be surprised to find rice served with meat like tapa, longganisa, corned beef or tocino for breakfast. Beef tapa is dried cured beef similar to “Beef Jerky”. This is traditionally prepared by curing the meat with sea salt and letting it dry directly under the sun for the purpose of preserving the meat

Merienda is more similar towards a tea time snack or light meal in the afternoon before dinner. Choices are kape (coffee), pandesal(bread roll), empanada (savoury, meat-filled pastries) or traditional pastries made from sticky rice like bibingka, sapin-sapin (multicoloured layered pastry 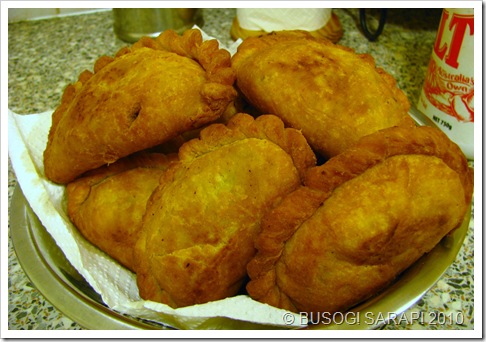 Pulutan is similar to a finger food, more so like a snack to go with liquor or beer. Sometimes it is also categorized as appetizers. More common pulutan are sisig (pig’s cheek skin, ears and liver that is boiled, then charcoal grilled and minced and cooked with chopped onions, chillies, and spices), adobong mani (deep fried peanuts mixed with garlic and salt), chicharron (deep fried pork rinds) and kropeck (fish crackers)

Adobo is one of the most popular Philippine dish and is kinda unofficially its national dish. It usually consists of pork or chicken, stewed or braised in a sauce made from vinegar, cooking oil, garlic, bay leaf, peppercorns and soy sauce.

Crispy Pata (deep fried pork knuckles) is also a local delicacy made by marinating the pork knuckles in a garlic vinegar then deep fried until crisp and golden brown. Tocino, a cured meat native to the Philippines (it actually means bacon in Spanish)  that consists of thinly sliced meat then layered with a mixture of anise wine, annatto, water, sugar and salt.

Chicken Inasal is a grilled chicken dish and one of the well known Ilonggo dishes. Chicken pieces are marinated in a unique blend of spice, coconut vinegar, calamansi juice, and annatto oil and grilled and basted till done. I tasted this in Andok’s, it was actually a chain restaurant offering barbequeud meals and it was so so so yummy! 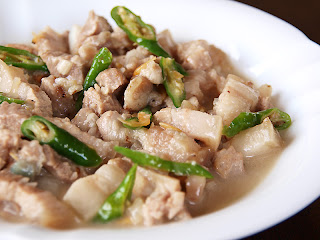 A traditional Tagalog dish, Kare-Kare is a Filipino party favourite. It is a stew made with oxtail or ox tripe, vegetables and a thickened peanut gravy. Its yellow-orange colour is made by using the hot oil steeped with achuete or annatto seeds.

For festivals and big family occasions, Lechon, a whole roasted pig with its shiny, taut, crispy crackling over an open pit is not to be missed. Different regions serve it differently, but most common, vinegar would be served as a dipping sauce.

Well, you know, I’m not going to tell you that Philippine Cuisine is the most healthy in Asia. It is higher in total fat, saturated fat, and cholesterol than other Asian cuisines.

Noodle dishes are generally called pancit.Noodles were introduced into the Philippines by the Chinese and have since been adopted into their local cuisine. Most of the pancit consist of noodles, vegetables and slices of meat or shrimp, like a chow-mien. 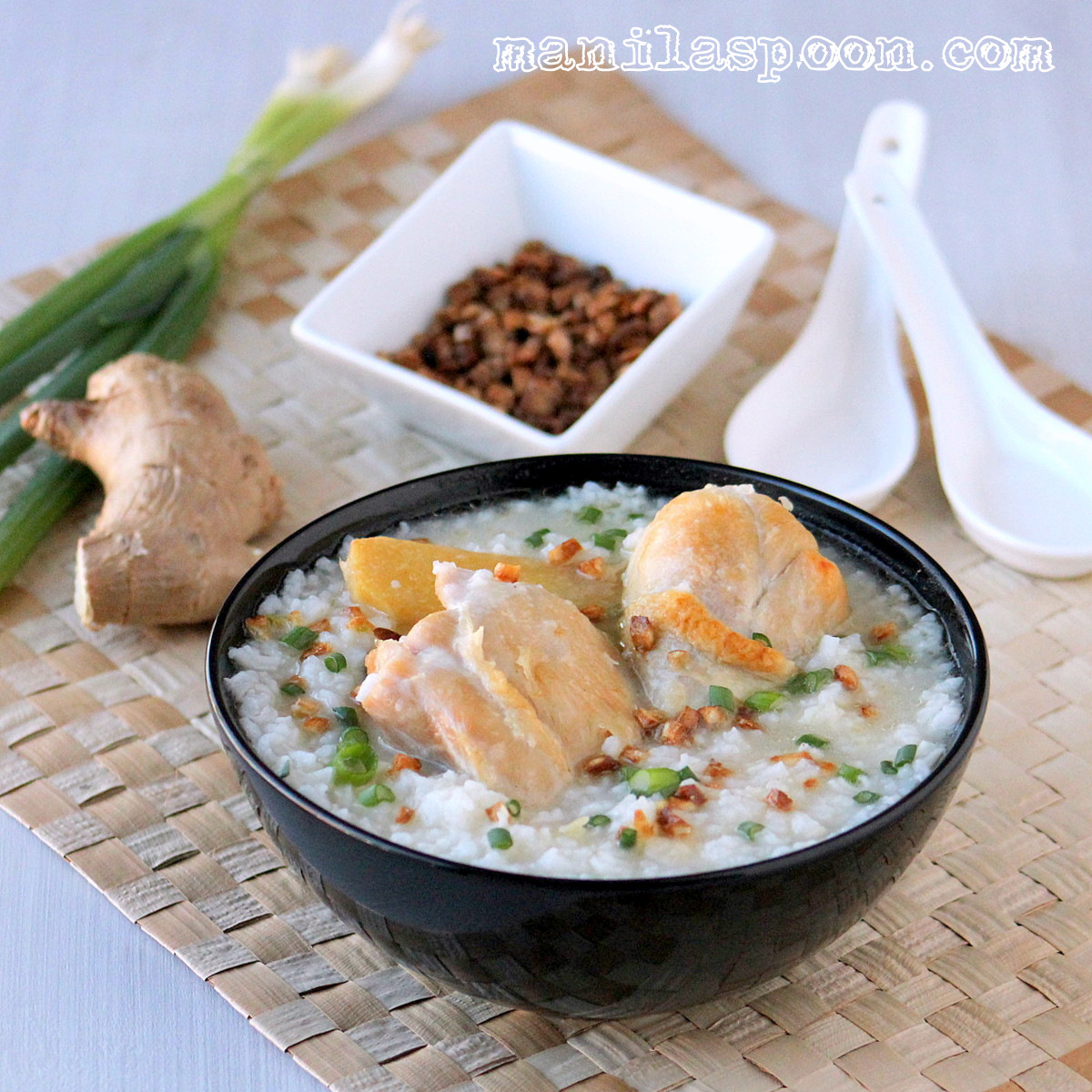 Paella is an internationally known Spanish rice dish originating from the Valencian region but its influence has stayed in Philippines. Paella Marinera or also known as Paella de Morisco usually consist of fresh seafood like shrimp, crabs and mussels. Not only saffron is used, but annatto powder as well.

Another popular Chinese influence dish is the fried rice. A simple garlic fried rice, the Philippines call it sinangag comes with dozens of variety. While in Boracay, we dined in Mesa and got to taste this Sinangag with Tinapa flakes (smoked fish flakes) and it was very yummy as well.

As a tropical oriental country, it should come as no surprise that there are many treats made from rice and coconuts. One often seen dessert is bibingka, a hot rice cake optionally topped with a pat of butter, slices of white cheese, salt duck eggs or grated coconuts. 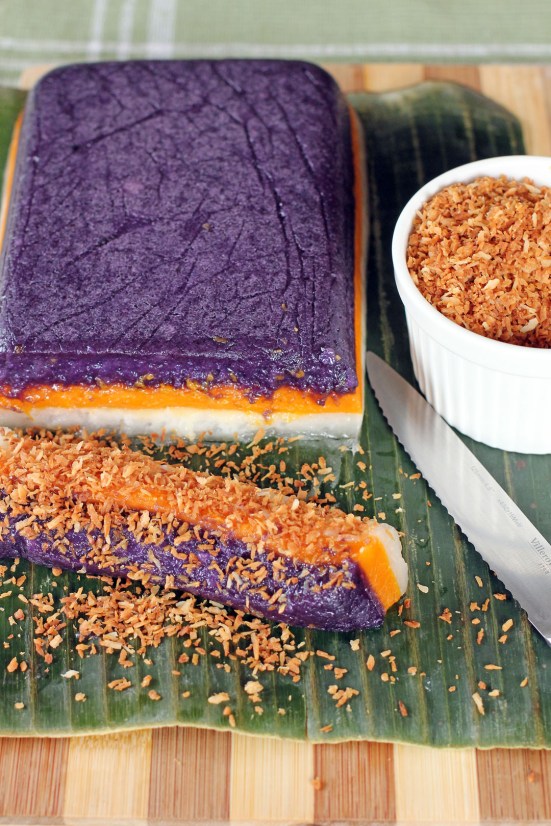 Leche flan, the superstar among the heavenly Filipino desserts, is a sweet, rich and luscious dessert similar to creme caramel. (recipe link) 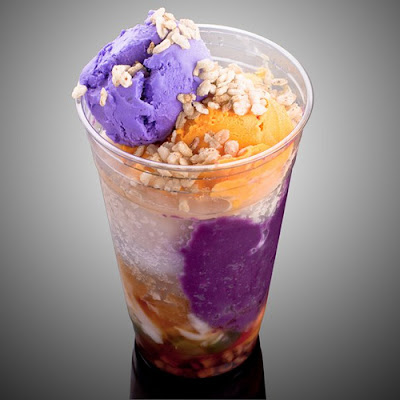 Halo-Halo got its name from the local world halo- which means mix. Every other neighbourhood street corner is likely to have its own halo-halo stand, especially during the hotter months of the year. It’s concoction of shaved ice, sugar, sweetened fruits, coconut, tapioca pearls, corn, jelly is bound to keep the Filipinos cool during Summer.

Buko (coconut) is abundantly grown in the Philippines and has served so many uses, one of which is being used as an ingredient for desserts. A traditional Filipino dessert of baked young coconut pie is buko pie, which is made with coconut meat and condensed milk. Sans Rival is a Filipino dessert that literally means “without rival”. It’s a treat made with alternate layers of crispy meringue and a French buttercream then topped with cashew or crushed nts.

Yema is a traditional sweets and is considered as a Filipino native delicacy. Yema is a type of custard candy made from egg yolks and condensed milk.

Pichi Pichi is a sweet and sticky tapioca dessert made from freshly grated cassava, sugar, water and pandan, steamed then coated in freshly grated coconut (similar to our version of onde onde)

Since I was in Boracay, I also got to try Real Coffee’s infamous Calamansi Muffins. The only way to get them is to prebook and pay for it. You most likely would not be able to get any by walking into the store just like that. Here’s a recipe hack if you want to try.

Getting some of Philippines Cuisine cooking ingredients

You may be able to find some of the specialty ingredients like coconut vinegar in Shoprite Specialty Store in Bangsar, KL or in Lucky Plaza if you’re from Singapore.

Some useful links and blog links

I will be making a few dishes from the Filipino cuisine throughout this month. If you would like to join too, here’s how.
To join:

1. Who can join? Anyone can join.
2. Prepare a dish (sweet or savoury) that is from Philippine, be it old time favourites, modern goodies or dishes that has been localized. Take a picture of the food or many pictures.
3. Provide recipe that is credited (from books, internet, friends or family or your own, be specific). Submissions without stating recipe sources will not be accepted for all forms of submission.
4. Submit your entry latest by 31st July 2014.

“I am submitting this post to Asian Food Fest – Philippines hosted by The Sweet Spot.”

Submit your entry via the Linky provided at the end of this blog post.

Bloggers can submit old recipes to Facebook, but please state “OLD BLOG POST”.
Anyone that has once cooked a Filipino dish and have a picture and recipe can submit to Facebook. Not necessarily a recently done dish. Bad Behavior has blocked 1384 access attempts in the last 7 days.