It’s new, it’s hot and it’s just baked last week! It’s a little too fast compared to my usual speed, isn’t it? That’s a good thing. I’m on a roll, getting bits and pieces of my mojo back. It’s just my laziness that gets to me sometimes, especially when I am glued infront of the television box, tee hee hee. 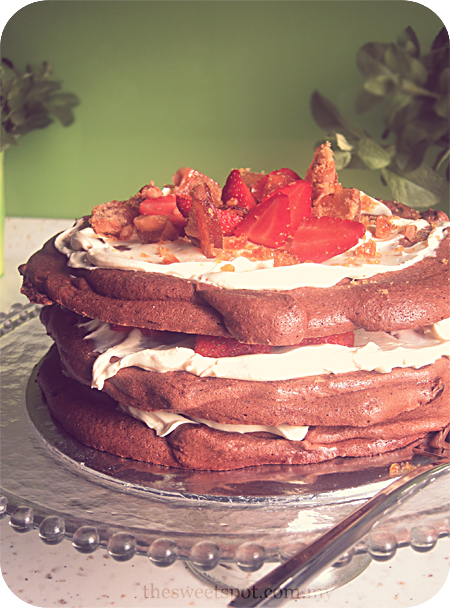 Every dessert probably has a story behind it, or how it was created/ adapted, or how the idea came about. I’m building alot of dessert ideas in my head, I just haven’t execute it yet. For this dish, the main ingredient was mascarpone or maybe the chocolate meringue?. I wanted to try to make it at home for the longest time ever, trust me, it is surprisingly easy! Quinn has mentioned to me a long long long time ago but I only got to making it now. Or was it the pavlova turned to meringue stacks that came about first then I needed a cream of some sort to fill it in. Either way, it makes perfect sense to have them both.

Let’s start with the mascarpone cheese.

1. (BO’s suggestion was to put it over a skillet / double boiler method, but I just didn’t want to wait that long for the cream to boil, hence I simplified it) Bring cream to 88 C or 190 F over a low heat in a sauce pan. Once it reaches the temperature, turn off the heat and pour in lemon juice.

2. It will look a little curdled, but just continue stirring it till it’s smooth and thickened. Pour into a cheesecloth (or my case, several coffee filters) and let it set overnight in the fridge. It is important that after pouring the cream, you do not press or apply any other pressure to it.

3. Let it cool to room temperature (about 10-20 minutes), cover with cling wrap and let it chill overnight or 24 hours.

4. It will thickened into a ball, pour it out and whip it lightly before using. There you have it! 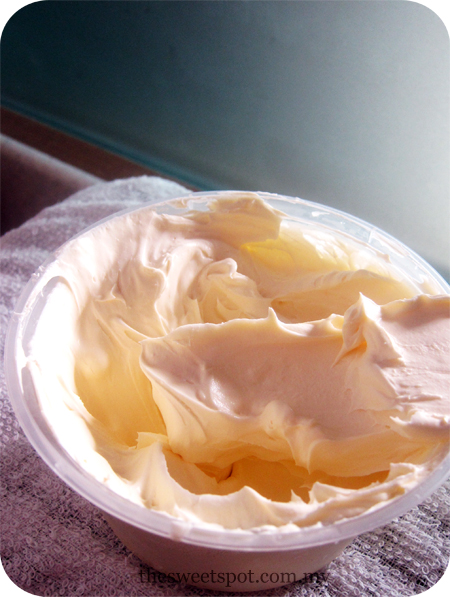 So after the cheese, here is the pavlova. Oh wait, it is not exactly a pavlova. If it ain’t cripsy on the outside, soft and marshmallowy on the inside, it ain’t a pavlova. I decided to call it a meringue stack instead. Initial idea was to make a pavlova using Nigella’s recipe and pile on the mascarpone and berries on top. But I wanted to try something else and with the same recipe, I divided into 3 portions and made 3 disks of meringue instead.I have made Nigella’s Chocolate Pavlova many times and it is my favourite. After making the meringue, I probably thought I won’t have enough mascarpone cheese because I only made 2/3 the recipe as I didn’t have enough cream. Well, that could be a blessing to my weight in disguise. 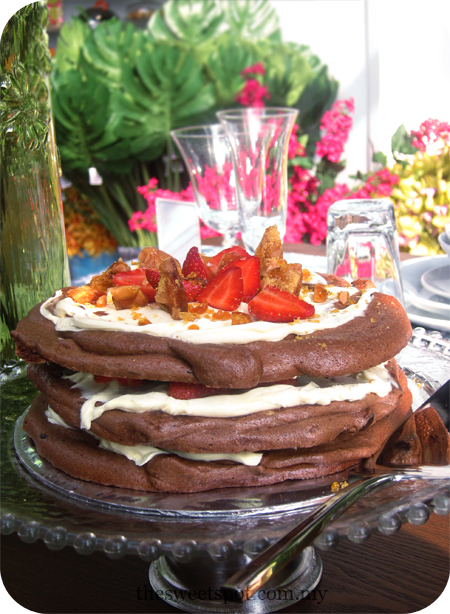 For the meringue stacks
(adapted from Nigella Lawson’s Fresh)

1 punnet strawberries (the Cameron strawberries were so sweet and just slightly tart. Similar to the korean ones but less aromatic)

1. PReheat oven to 175 C and line a baking sheet with parchment paper.Mark 3 8″ circle on the paper, turn it over so the pencil marking is facing the pan and that it doesnt contaminate your meringue later.

2. Beat egg whites until soft peak, then add in vinegar and gradually add in the sugar while still whisking the egg whites. It should be glossy and stiff. Sprinkle over salt, cocoa powder and chopped chocolate. Gently fold in until mixed through.

3. (If you’re making a pavlova, pile the meringue onto a 9″ round on the baking sheet, then bake at a 150 C oven for bout 1 to 1 1/4 hrs,) To make the stack, scoop meringue into a empty piping bag. Cut the tip relatively large; about 15-20mm and pipe the meringue in a coiling motion till it fills up the 8″ circle. It should be about 2.5cm in height per disk. But then again, adjust to your liking if you wish.

5. To assemble, lightly whip up mascarpone cheese. Lay a disk of chocolate meringue, pile on some mascarpone cheese and some halved strawberries. Top up with another disk and repeat for the remaining 2 disks. On the top, well, it’s totally optional but you may as well make a macadamia brittle. Or just scatter some toasted macadamia nuts. 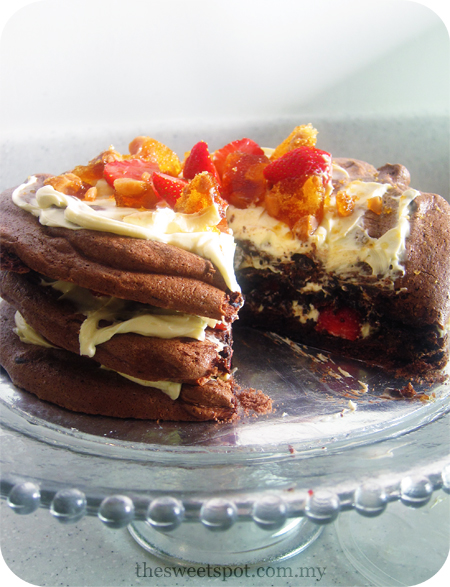 For your viewing pleasure. Have a lovely weekend

Thanks to Hennessy for showing me a great time to

Thank you to Hennessy Malaysia for sending over th

Enjoying the finer things in life with Hennessy X.

Got my dinner from @knowherebangsar today. I order

Bad Behavior has blocked 907 access attempts in the last 7 days.