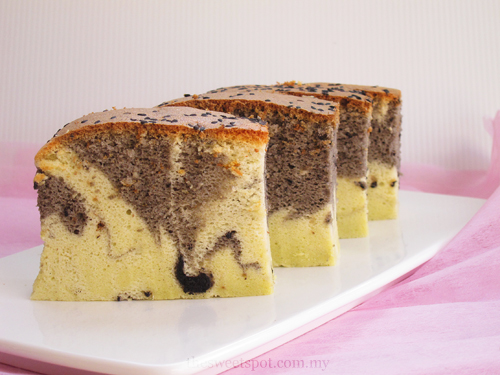 A few months ago, I had an order of 6 carrot cakes. So I bought a whole pack (2kg of cream cheese) because it’s just cheaper to buy in bulk, right? Though I don’t actually need to use so much cream cheese. But anyway, extra means I get to bake cheesecakes! Initially I wanted to bake a dense cheesecake but I wasn’t sure what was I thinking that day, I baked a Japanese Cotton cheesecake instead. So since I’ve done the original one, a matcha one (Oh, I haven’t posted it up eh?) I thought I’d continue and do another Japanese flavour inspired one. Black sesame it is then. But instead of having a whole Black piece of cake, I marbled it. It looks pretty, like yin and yang.

I really like the smokey, nutty and sweet flavour of black sesame. I mean, you can see from this, this and this.. Lol, overused ingredient Haha.. 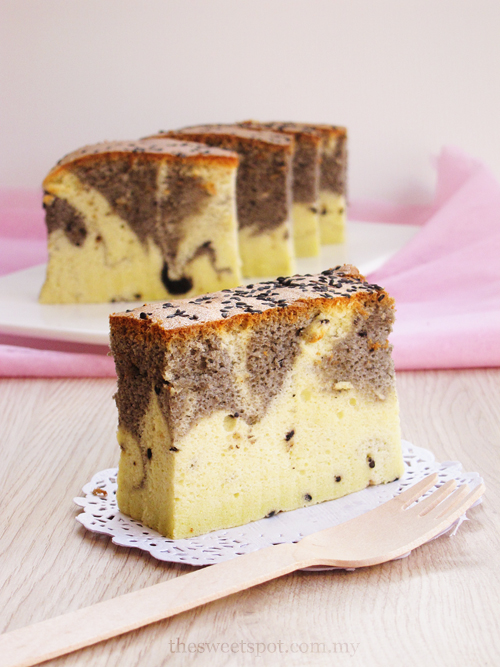 1. Melt cream cheese, butter, half of the milk, vanilla seeds and pod, over a double boiler. In another bowl, mix the remaining milk and black sesame paste. Whisk it well so it becomes a smooth paste. (May need to heat over double boiler to soften it) Strain the mixture through a sieve just to make sure there are no lumps of cream cheese. Cool the mixture. Fold the first cream cheese mixture in the flour, the cornflour, salt, egg yolks, lemon zest and mix well. Divide the mixture to 2 bowls, add the black sesame paste on another. So now you have 2 bowls, 1 plain and 1 with black sesame.

2. Whisk egg whites with cream of tartar or lemon juice until foamy. Add in the sugar and whisk until soft peaks form. To prevent large holes, do not whisk egg whites at the fastest speed. Use a moderate speed to achieve soft peaks (and tiny bubbles).Divide the meringue into half as well (Just eyeball it)

3. Add the cheese mixture and toasted black sesame seeds to the egg white mixture and fold well for both. Lightly grease and line the bottom and sides of the pan; make sure the paper is 1.5 inch higher than the pan as the cake will rise pretty high if u’ve done it right, with greaseproof baking paper or parchment paper). Wrap the base of your cake tin with aluminium foil if you are using a springform tin, to prevent seepage.  Pour half of plain cream cheese mixture into a 8-inch round cake pan, dollop half of the black sesame cream cheese mixture sparingly. Then add in the remaining of both. Use a skewer to draw figures of 8 around, in the cake pan .Cover the top of the cake loosely with an aluminium sheet.

4. Bake cheesecake in a water bath for 1 hour 10 mins or until set and golden brown at 160°C. Remove the aluminium sheet after 50 minutes of baking.

5. Leave to cool in oven with door ajar, about 30mins to 1 hour. Sudden changes in temperature may cause the cake to cool too quickly and collapse. 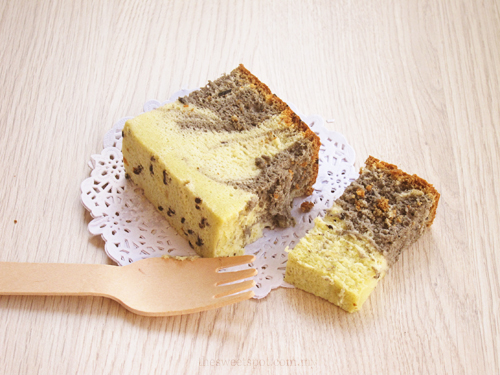 Bad Behavior has blocked 2780 access attempts in the last 7 days.